GCI had invested heavily in 5G communication, laying the groundwork for the next generation of connected experiences. In late 2019, they had partnered with Ericcson on the technology and towers, and crews could be seen around Anchorage upgrading various points of the network. But 5G was largely an unknown to the local market.

In early 2020 GCI launched their 5G network. GCI was not known for their quality service or innovation and was concerned about the big three wireless companies receiving more attention/market share despite GCI's extensive Alaskan infrastructure.

In 2020 initial users would be early adopters living in Anchorage. As 5G coverage expands in Alaska so will the audience. This campaign was designed to be scaled statewide and well beyond the early adopters.

I worked with an associate creative director, copywriter, project manager, and visual designer. I was the sole UX resource on the 5G team. Another Horizontal team is currently working on e-commerce with GCI. While at Horizontal Digital, I also worked on a number of smaller rollouts and various promotions for GCI. During March and April, the 5G team pivoted to working on COVID response pages for GCI and put 5G on the side burner.

The project consisted of three phases specific to the Anchorage market which will be replicated statewide as 5G coverage expands across Alaska. The phases were as follows:

Originally the timeline was driven by the tower light-ups and March Madness ad buys, but COVID rearranged that timeline for us. Another unique (constraining) aspect of this project was that GCI had no functional e-commerce on their site; users could put items in a cart, but the cart must be saved and purchases take place in-store. 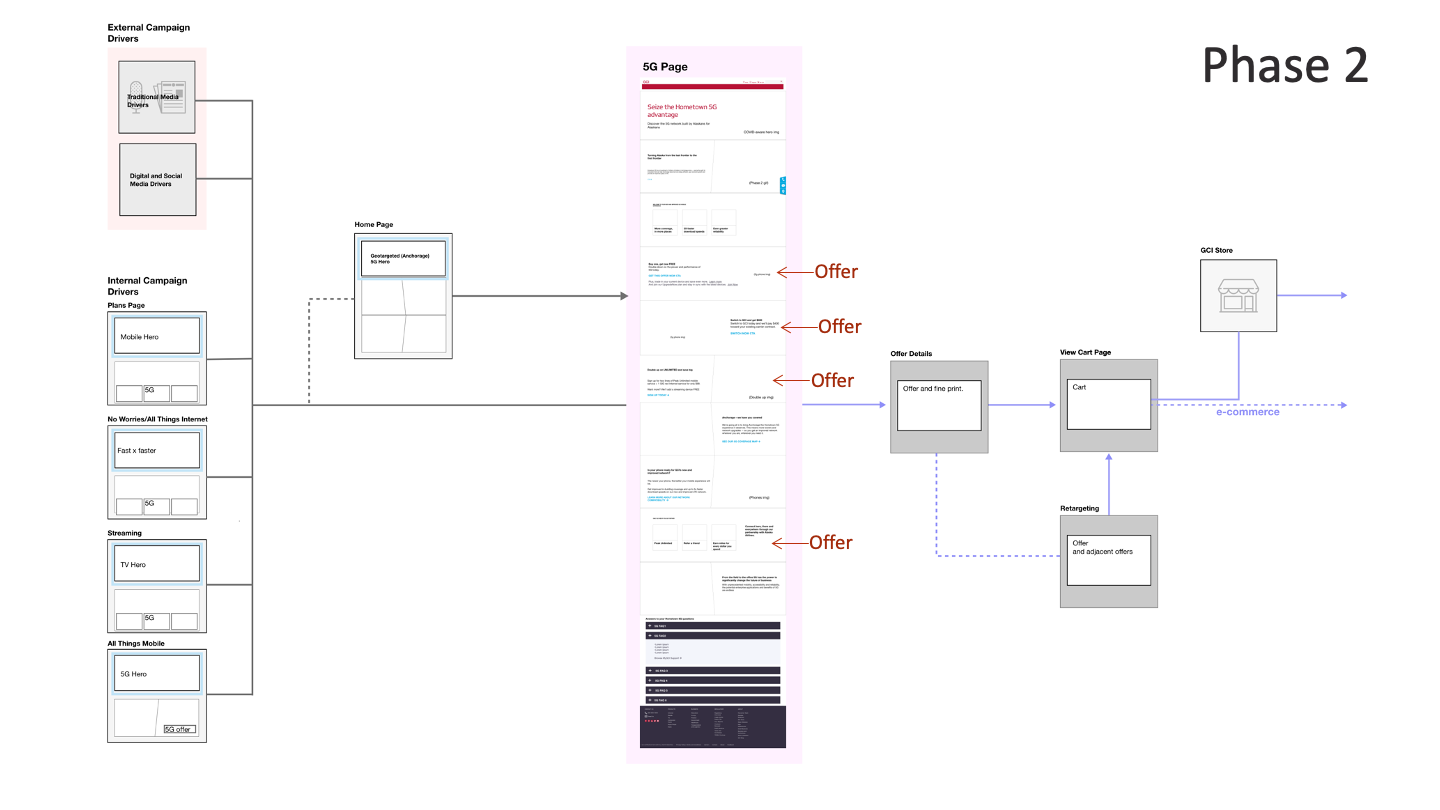 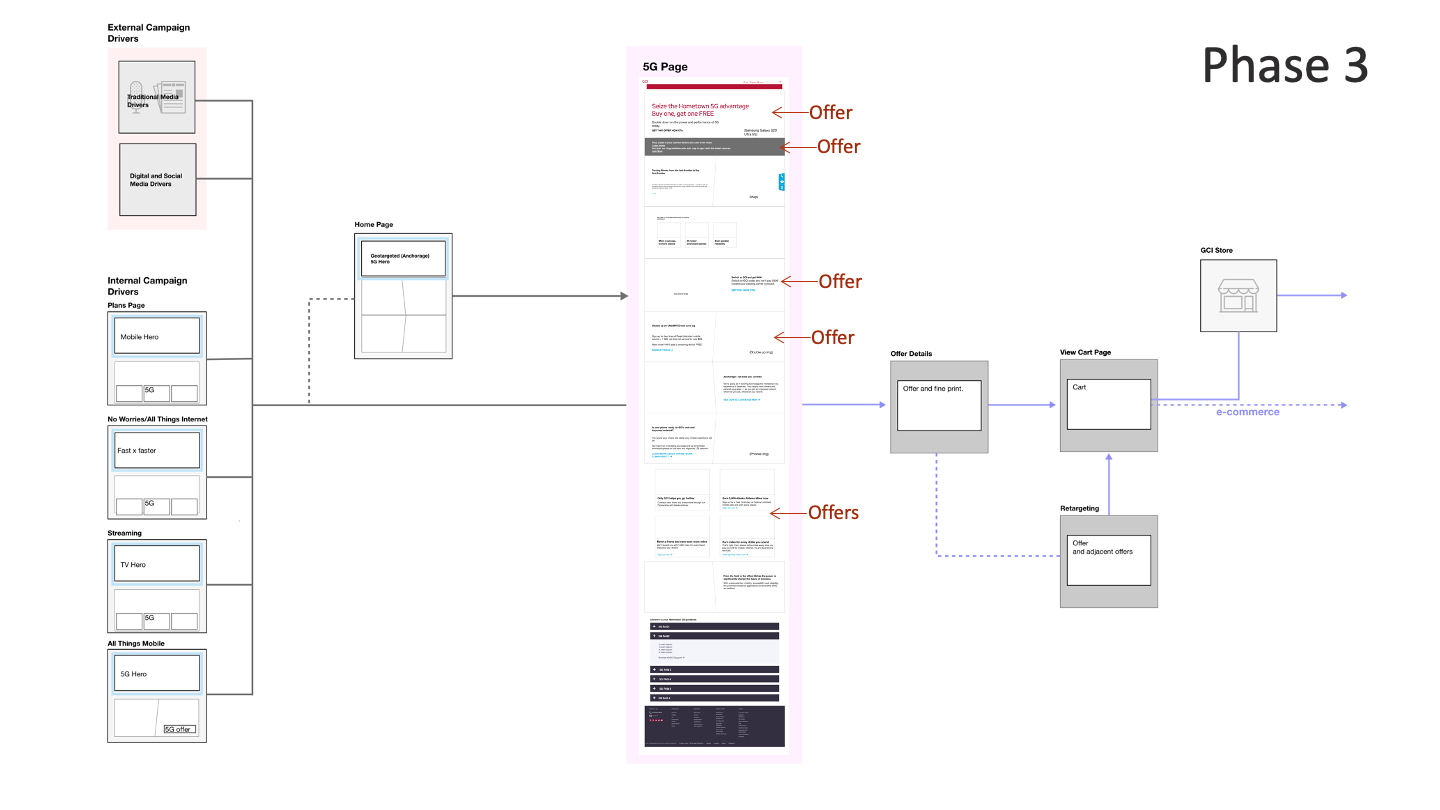 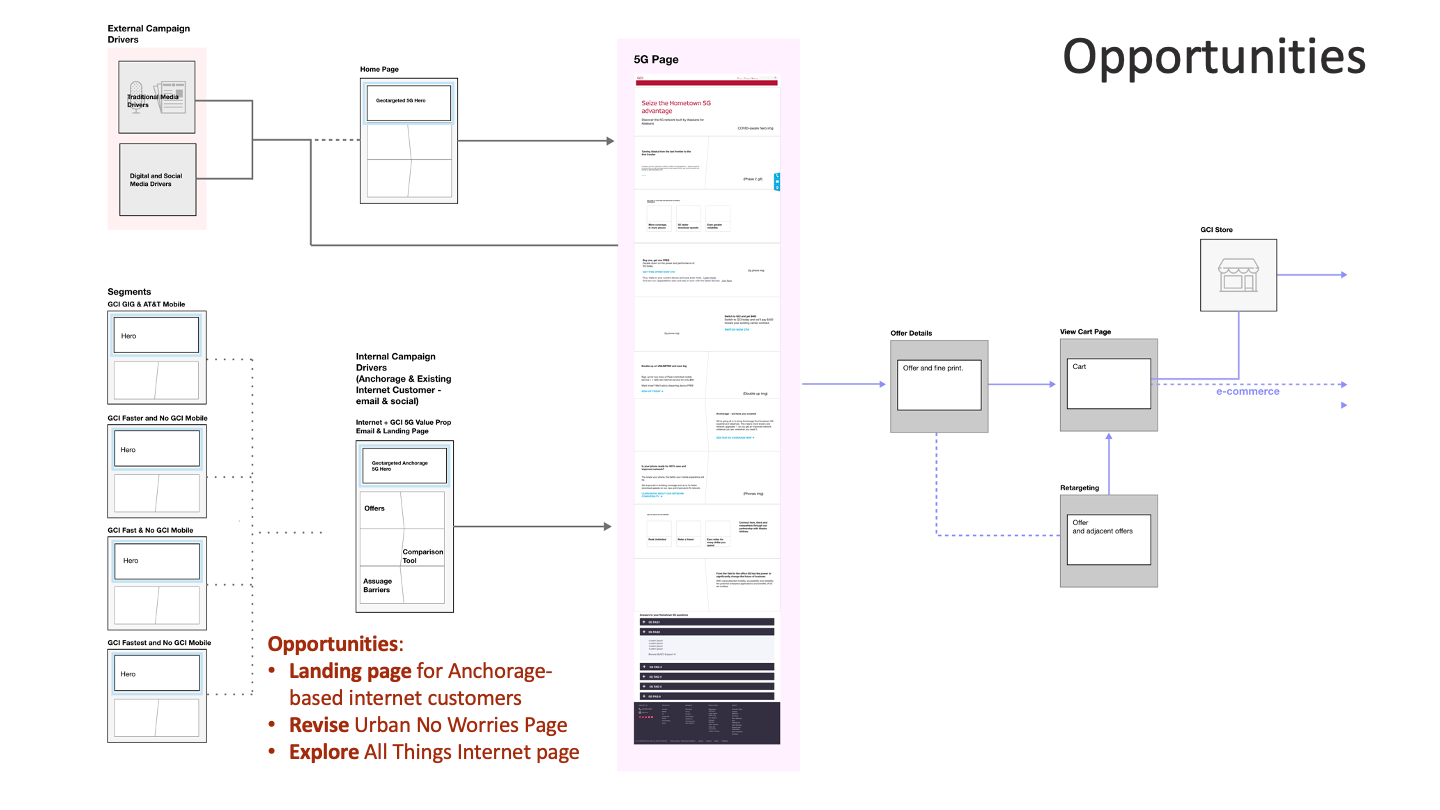 We were given a number of market segments, cross-promotional info, and business objectives but with no functioning e-commerce, our landing page had relatively straightforward user flows (which can be seen above). As I had worked on a few GCI projects and was familiar with their content management system and available components/modules, I could quickly put mini-wireframes into the flows for early-stage presentation decks.

We devised a phased approach; the first phase would have to be an informational landing page geo-targeted to the Anchorage market. Subsequent landing pages at the latter phases would still convey information about 5G services but would highlight devices as they came to market.

Despite being tasked with solely a series of 5G pages I had to zoom out to look at the bigger customer picture.  In the end, I creating a number of journeys during my design process while exploring the customer landscape. I found How Hard Is It To Be Your Customer a valuable reference through my journey work at Horizontal.

As a client, GCI was also receptive to ideas and strategies outside of our scope, so we often had a backlog of items that we had on our radar and would suggest at appropriate moments during client calls.

Some of the guiding questions and internal discussions were focused on: 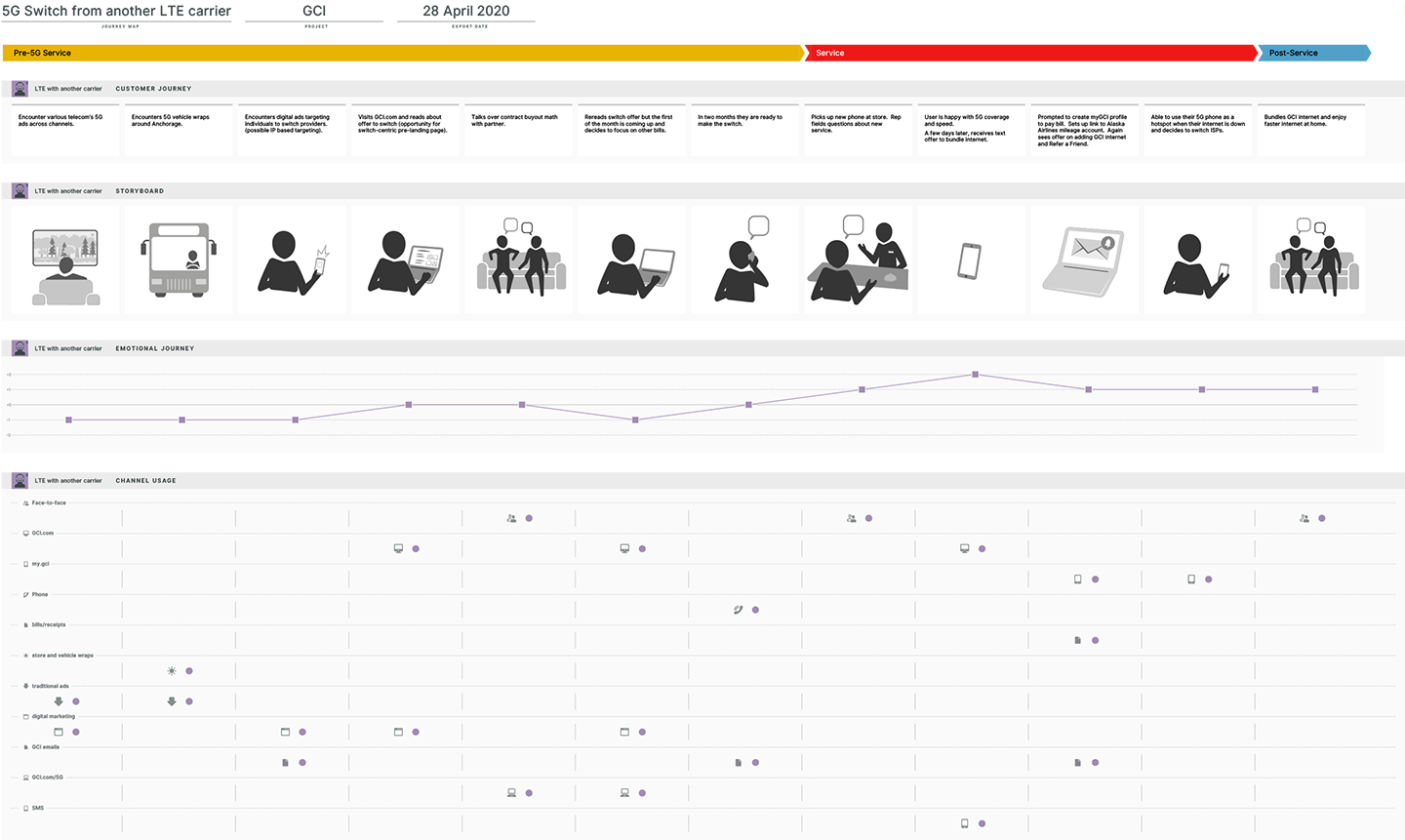 One of four customer journey that I created; we explored a number of hyper-specific segments to compare and contrast the different journeys/touchpoints 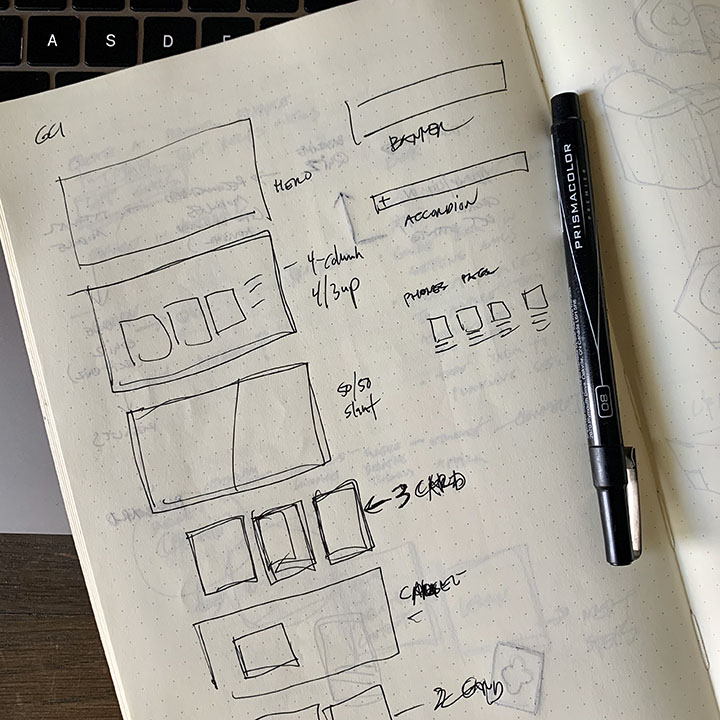 I enjoy sketching, but the GCI site is based on just eight modules (Sitecore), and I often found it best to just refresh on what the available options were. Horizontal operates on an agency model and I had a very light allocation on GCI projects. For me, this meant quickly getting to wireframes that were reflective of what the Sitecore modules allowed, so I often just used sketching as a way to warm up my brain for hours that I was allocated to GCI.

At the beginning of my design process, I created wireframes for both internal and client reviews. Unique to any project that I've worked on, we often presented fairly developed visual designs early on as quasi-wireframes in parallel conversations. Some days I would present a wireframe packaged into a user flow and the visual designer would have a full-fledged mock-up presented during the same short Zoom meeting.

I used both Sketch and XD to create wireframes. These were presented remotely and the copy was often being presented concurrently. During the calls, client feedback most often was focused on specific lines of copy or legal verbiage, and occasionally design feedback would come later via email. It would often take 4-5 micro-iterations before being sent to the developers but overall these were quick turnaround projects.

Shown here is a mock-up of the Phase Three page (made by the visual designer, adamjmarks.com)

During Phase Two, we received updated graphic direction to align with GCI's advertising agency.  We migrated some of their print and physical assets (oh hello gradients) into our pages.

My biggest takeaways working on GCI were navigating multi-tasking and the on-demand workflow at an agency setting, coping with a difficult copywriter, and how to tailor presentation concepts to two distinct business stakeholders (CMO vs Product Team); all valuable lessons.